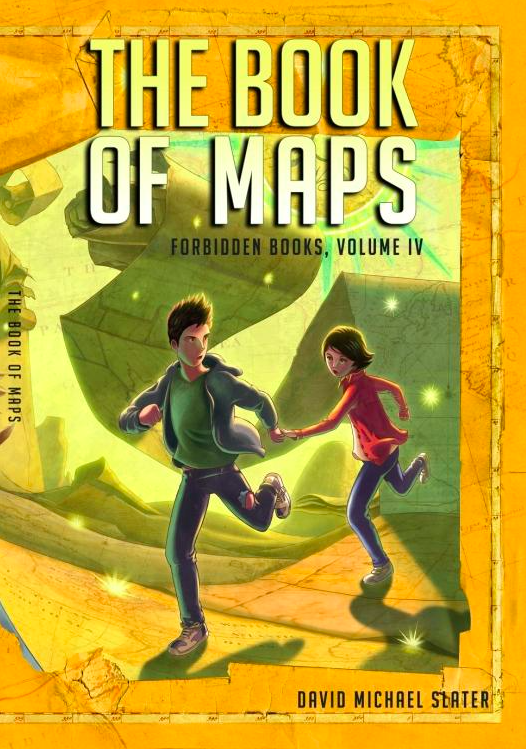 A map to all corners of the world, and—if they’re right—the next.

A year later, what happened in the caves at Eden’s edge still haunts Dexter and Daphna’s nightmares: falling through the darkness, the stench, the flapping wings—that maniacal laughter. Back in Portland, they’ve built a new life with their new mother, but now, the night before they were officially to open a new chapter in their lives, they learn the awful truth: When they came back from those dreadful caves, something came with them—something older than time and capable of unleashing a devastating plague. Once again, the twins are on the run, not only from the terrifying creature, but also from the authorities who think Dex and Daphna have answers—and from other powerful interests who want to know what secrets they possess. Their newest secret, a book of miraculous maps, is their best hope of survival. If they can solve its mysteries, it might lead them beyond their nightmares—and perhaps even beyond their wildest dreams.

Book Pleasures
The first books in this series “Had me at Hello.” However, the most intriguing and wonderfully exciting part about that statement is the fact that the third book in this series…is even BETTER. When you review a great deal of books, you sit down in an easy chair to begin, and you only get through a few chapters before life intervenes once again (kid screaming, dog barking, cell phone ringing, etc.). It is very rare to sit down with book in hand and not bother with anything or anybody until you’ve turned the last page. That’s what happened last night, folks. Couldn’t put it down!To bring you up to speed, this series focuses on the Wax twins – Dex and Daphna. Let’s just say that through finding the Book of Nonsense and then the Book of Knowledge, and getting wrapped up in a story that’s as big as Adam and Eve…they were happy to have had a year off. When we meet up with them in this third volume, they are very excited about their new bookstore opening the next day called Paradise Bookshop. They’ve been living with Evelyn – their guardian, best friend, and a woman who has lived an EXTREMELY long time. They’ve been going to school, working on the grand opening of the shop and, basically, feeling about as normal as they’ve been able to feel in a long time. They have heard of the somewhat violent break-ins in libraries and research centers outside of the United States, but they’ve been trying not to think about it. They are simply living a quiet, peaceful life and they want it to stay that way.Unfortunately, peace was never a staple in these children’s lives. As they look out the window of the shop and watch a man dressed as a monk hurrying through the streets and directly at them, the kids can feel the well of dread, panic, and fear begin to expand in their souls. As the frightened man runs in, tells the kids to hide, and proceeds to race out of the store and be attacked by a white-robed apparition, the small amount of peace that Dex and Daphna had shatters. Soon, their beloved Evelyn is being rushed to the hospital with some form of ancient disease; and between a steel knife, strange winds, disappearing monks, men who wear animal masks, and an eccentric billionaire, Dex and Daphna are thrown into yet another adventure that centers around the great mystery of the Book of Maps.Not only is this story extremely well-written, but the twins are great characters. They’re not the “perfect” hero and heroine that so many writers create. Dex and Daphna have very real issues and hardships in their lives – from physical anomalies to mental idiosyncrasies. They’re also a “team” that you will cheer for in every book. What’s the only downside? The book was over, I turned the last page, and I still wanted more. My only request is that David Michael Slater put his nose to the grindstone and crank out the next one so I can have this much fun again.As always, I want to tell each and every one of you every aspect of this story because it was SO good! But I’m not going to tell you because it was SO good that you have to go out and get this series. This is a perfect Christmas gift for children and young adults in your household. I’m telling you, the amount of “buzz” that’s building around this series is getting “louder” and “louder,” and I’m telling you now…jump on board this train. You’ll be extremely happy that you did.Amy Lignor, Bookpleasures.com Reviewer