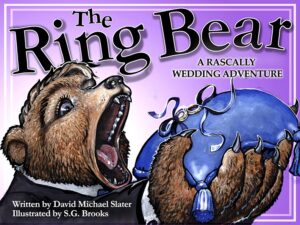 Westley and his mom are the perfect pair of pirates. That is, until she tells him she’s going to marry Stan. When she asks Westley to be the ring bearer at the wedding, he hears “Ring Bear.” So…there’s only one thing to do: become a REAL bear and wreck everything!

THE RING BEAR has been chosen as an HONOR BOOK by the SSLI – The Society of School Librarians International! It has also been selected for inclusion in the nationwide Accelerated Reader program.

Orson Scott Card (author of Ender’s Game)
Column: Uncle Orson Reviews Everything Herbie, Already, Alot, Alright, Peck, and Ring Bear June 26, 2005 First appeared in print in The [ http://www.rhinotimes.com ] Rhinoceros Times, Greensboro, NC. Even though my youngest is really too old for picture books, I still can’t resist them. Recently I picked up The Ring Bear, written by David Michael Slater and illustrated by S.G. Brooks. In the story, a young boy plays pirates with his mother, wearing eyepatches and going under the noms de guerre “Westley the Wicked” and “Mom the Mean.” Mom’s friend Stan doesn’t play — he won’t wear the eyepatch. He enjoys watching their imaginative life, but it’s something they share between themselves. Then Stan and Mom decide to get married, and when they ask Westley to be the ring bearer, he misunderstands and thinks of himself as the Ring Bear. As a bear, he can show his anger at Stan’s intrusion, and he is fully prepared to devour the ring rather than carry it up to Mom and Stan. This is a sweet, charming, funny, tender book. The art is warm and witty, the writing understated and, precisely because it isn’t maudlin, it brought a tear to my eye. It’s not a “problem” story, to be trotted out when a kid’s mother is about to remarry. It’s a story any kid could enjoy, treating the remarriage issue as the simple fact of family life that it so commonly is.

Blended Families (Podcast)
Click on the link to hear a Podcast interview about THE RING BEAR!

JustOneMoreBook.com
The Ring Bear was featured on JustOneMoreBook.com podcast (April 6, 2007). Podcasters Mark Blevis and Andrea Ross call The Ring Bear “an incredibly fun and endearing little story.” For a link to the audio visit http://www.justonemorebook.com/?s=ring+bear. A transcript of the show is available at [ http://flashlightpress.com/ringbear.html ]http://flashlightpress.com/ringbear.html.

Marya Jansen-Gruber
Sensitively created, this picture book does a masterful job in showing us how confused a small child can become when his or her home life is changed in any way. Confronted with the idea of his mother’s marriage to Stan, Westley wonders if his mother still wants him and also if Stan wants him. The shifts that Westley makes between his imaginary personalities and his real self not only show us how powerful the imagination can be in a child’s life but it also emphasises Westley’s uncertainty. The boy takes refuge in an imaginary world when the real world becomes too bewildering and worrying for him. After a while he isn’t quite sure which world he belongs in. The illustrations in this unique picture book are full of vibrant and glowing colour and the illustrator’s portrayal of the sad little boy is both touching and affectionate.

Family Times Inc.com
A charming and tender tale…[that] opens the door for parents and children to speak with each other about their own evolving families.

HealthyBooks
The Ring Bear was glowingly reviewed on HealthyBooks.org.uk. “Excellent on the inner turmoil suffered by children when a life-changing event comes along. The illustrations are irresistible, with Westley changing from boy to bear and unsure himself as to how he feels.”

Midwest Book Review
The Ring Bear: A Rascally Wedding Adventure is a children’s picturebook that deals with a serious theme. A young boy is used to living with just his mother; he doesn’t want a stepfather, yet she is getting married and anxious to show him that he will always be a beloved member of the new blended family. He is to be the ring bearer, but he hears it as “ring bear” and decides to dress up as a bear to scare everyone away! The captivating illustrations by S. G. Brooks tell of the struggle to bridge rifts of fear and mistrust with enduring love, in this [an] original, warmhearted, and highly recommended story by David Michael Slater.

Karen D. Adolphson, Editor Your Stepfamily Magazine
…Addresses common stepfamily issues… and offers an imaginative and sensitive solution. It was a pleasure reading this – the text and the illustrations are both lively, and work well together – as a successful illustrated book should!

Mary Quattlebaum, Washington Parent
…With humor and compassion, author David Michael Slater gets at the heart of the child’s worry and anger.