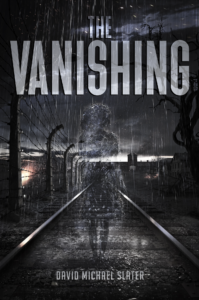 To save her best friend from the horrors of Nazi Germany, an invisible girl must embark on an utterly unforgettable journey of redemption and revenge. The Vanishing is fierce and loving, devastating and compelling, a breathtaking blend of history, fiction, and magical realism.

*Warning: This book may not be appropriate for younger and highly sensitive readers. 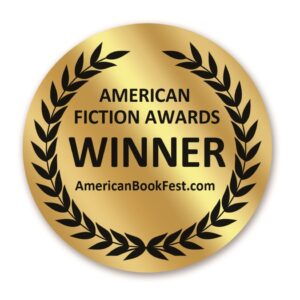 ADVANCE PRAISE FOR THE VANISHING

Slater manages to craft that rarest of things: a Holocaust novel that feels new… A tense and spellbindingly gripping fantasy meditation on the horrors of the Holocaust.
Kirkus Reviews
David Michael Slater in his novel The Vanishing has dared to imagine the unimaginable. His story involves a tragic end of innocence and the courage, leavened by a dash of the miraculous, that allows a young girl to navigate history’s greatest nightmare, and to awaken from it with her sense (and ours) of human possibility still intact. A remarkable book.

Steve Stern, author of The Frozen Rabbi and Winner of the National Jewish Book Award

I’ve long wondered whether any writer would have the courage to truly portray the sodden, mindless, pointless brutality of the Holocaust as it was. In The Vanishing, David Michael Slater has done just that, and I haven’t been so moved by a book in a long time.

Eric A. Kimmel, 5-time winner of the National Jewish Book Award, Recipient of the Sydney Taylor Award for Lifetime Achievement.

The Vanishing is a story of loyalty, revenge, and the possibility that human beings have as much capacity to love as to destroy one another. It offers a way to ask how we can transcend our worst contexts to shape a more humane and just future for us all.

Rachel DeWoskin, Winner of the National Jewish Book Award, author of Someday We Will Fly

Unflinching, honest, and riveting, The Vanishing is one of the most compelling novels of the Holocaust that I have read in a long time. It’s a must-read.

Kathy Kacer, Winner of the National Jewish Book Award and author of thirty books about the Holocaust for young readers

Like all great fantasy, The Vanishing centers on human truths, just as a golem springs from the ground of human need. Through Sophie Siegel’s eyes, we see both the brutal truth of the Holocaust and the essential and timely truth of how much human survival depends on persistent acts of resistance borne out of love.

Sarah Blake, Winner of the National Jewish Book Award and author of the NYT bestsellers The Postmistress and The Guest Book

In The Vanishing, David Michael Slater has created a world—not the actual world of the camps, as he would be the first to acknowledge, but an invented world that offers a devastating, tender, emotional, loving, and honest glimpse of the real one. Sophie appropriately ghost-like journey will enthrall and lead the reader to investigate for themselves this darkest episode in history – for that I am grateful.

The Vanishing is a tragic, yet beautiful story that deserves a place on the shelves among some of the greatest literature penned on the Holocaust.

Mark A. Cooper, author of the Edelweiss Pirates series

It has often been said that we need creative ways to illuminate the horrors of the Holocaust for each new generation. David Slater’s novel, The Vanishing, has accomplished this remarkable feat. An important and fascinating read.

The Vanishing is a vivid journey through every emotion in the human experience. It is heart-wrenching and hopeful by turns. Sophie Siegel is an incredible heroine, one readers will never forget. May your memories of this book be a blessing.

Michael P. Spradlin, New York Times Best Selling author of The Enemy Above and Into the Killing Seas

Sophie Siegel wakes up one morning to find her mother sewing a yellow star onto her clothing. And so begins the descent of her family into the Nazi nightmare that will soon trap nearly all of Europe’s Jews. David Michael Slater tells Sophie’s story in this moving, compelling, and highly dramatic novel.

Richard Zimler, author of The Last Kabbalist of Lisbon and The Gospel According to Lazarus

This remarkable book seems to touch on every aspect of the Holocaust. Through the magic of Mr. Slater’s cinematic writing, we accompany our invisible heroine to the ghetto, to the camps, to the forests, to the end of the war and beyond. The Vanishing is fierce and loving, devastating and compelling, a breathtaking blend of history, fiction, and magical realism.

Helen Maryles Shankman, author of They Were Like Family to Me

The Vanishing must be the most vivid work of historical fiction about the Holocaust that I have ever read. There were times I broke into a sweat at the intensity of it. David Michael Slater has done an incredible job in conveying the tragedy of the Holocaust and the triumph of the human spirit.

The Vanishing took my breath away and held it until the very last page. Not many books on the Holocaust leave a reader crying and smiling, but this one absolutely did.

Felice Cohen, author of What Papa Told Me

David Michael Slater intwines the gruesome horrors of the Nazi Judenrein “cleansing of Jews” during World War II with a captivating tale of an invisible Jewish girl struggling to keep her best friend alive. Slater’s artful use of fantasy, history, and folklore places The Vanishing in the literary tradition of Ursula K. Le Guin.

There are books one reads and there are books one experiences. David Michael Slater’s remarkable The Vanishing falls into the latter category. From the moment of Sophie Siegel’s ‘vanishing’ to her stunning role in one final shocking death, this book takes hold of the reader and does not let go–not until the last page is turned and, indeed, not even then.

David A. Poulsen, author of Numbers, winner of the Sakura Medal

There is magic here… of a curious kind. David Michael Slater’s brave, audacious decision to sprinkle a dollop of magical realism onto the horrors of the Holocaust offers a haunting reminder that there is hope in hopelessness, light in darkness, survival in struggle.

Daniel Paisner, co-author of The Girl in the Green Sweater: A Life in Holocaust’s Shadow

The Vanishing made me gasp and cry. Though not for the faint of heart, its blending of brutal realism with magic and folklore conjures a daringly hopeful story of friendship, devotion, and caring during the Holocaust.

I read The Vanishing in one sitting because I was that invested in how Sophie Siegel’s story lays bare the nightmarish realities of the German Holocaust. It’s that powerful.

The Vanishing is a serious, powerful, and insightful exploration of the Holocaust that, using elements of fantasy, takes readers places that no memoir ever could.

The beauty of The Vanishing is that, through elements of fantasy, it conveys the reality of the Holocaust in a deeply moving way.

The Vanishing is the ultimate revenge story and one of the most memorable novels about the Holocaust I’ve ever read.

The Vanishing is a powerful and important book that reaches straight down to touch the essence of our humanity.

Ian Lewis, author of The Ballad of Billy Bean

The Vanishing leaps into our imagination, allowing us to experience what young teens and children did during the Holocaust in a way that is both memorable and entices further conversation.

There are many compelling novels about young people in the Holocaust, but none have taken a more original approach than David Michael Slater’s gripping saga, The Vanishing.

Allan Zullo, author of Survivors: True Stories of Children in the Holocaust

The Vanishing is a deeply moving, captivating account of the Holocaust as seen through the eyes of a child, Sophie Siegel, a truly brave and memorable character.

Sheryl Needle Cohn, Ed.D., Holocaust Educator and author of The Boy in the Suitcase: Holocaust Family Stories of Survival

The Vanishing is an unflinching evocation of the horrors of the Holocaust. Prepare to squirm, grimace, cry… and to believe in guardian angels.

Jenny MacKay, author of Children of the Holocaust

The Vanishing is a powerful and compelling blend of historical fiction and magical realism. This vital book is an antidote to ignorance.

Jack Mayer, author of Life in a Jar: The Irena Sendler Project

The Vanishing is a brilliant portrayal of an unimaginable time in history. With skillfully defined characters and rich, captivating descriptions, this is a must-read for everyone. I loved it.

The Vanishing is a gut-wrenching historical fantasy that doesn’t skirt the horrors of the Holocaust. David Michael Slater’s dark revenge novel will take readers on a haunting journey of an invisible girl as she struggles to save her beloved friend.

Unique, absorbing, and fast-paced, The Vanishing is an important book that will stay with readers well beyond its conclusion.

Sophie Siegel’s brave heart and sheer grit compel readers to urgently follow her through the horrors of Nazi Germany on errands of mercy and revenge. Holocaust stories like The Vanishing, told in new and unexpected ways, are vital to the world–lest we never forget. I fell in love with Sophie and really loved this book.

The Vanishing kept me in the fictional dream from the first page to the last. With hints of The World That We Knew (Alice Hoffman) and The Devil’s Arithmetic (Jane Yolen), it is a fantastical tale of the enduring power of friendship during our darkest history. David Michael Slater’s charismatic protagonist, Sophie Siegel, will continue to own a piece of my heart.

The Vanishing is a gripping, thought-provoking page-turner based on brutal historical events, told through the eyes of an extraordinary teen heroine.

Susan Goldman Rubin, author of Fireflies in the Dark: The Story of Friedl Dicker-Brandeis and the Children of Terezin and The Anne Frank Case: Simon Wiesenthal’s Search for the Truth.

In The Vanishing, author David Michael Slater expertly tells the story of the Holocaust by weaving readers through a series of haunting locales that bring with them formidable characters, incomprehensible tragedy, and heart-thumping twists and turns. A page-turner, The Vanishing is reminiscent of Markus Zusak’s The Book Thief.

Sophie’s journey in The Vanishing, from innocent schoolgirl and traumatized witness to avenging angel, is heartbreaking and harrowing, offering a glimpse at many of the most dreadful moments of the Holocaust.

Shannon Delaney, author of The 13 to Life Series and Weather Witch series

In one novel, and in a most unique way, The Vanishing weaved together the voices of the Holocaust–voices that told of unimaginable evil and horror, and voices of those whose courage, compassion, and commitment to humanity inspire us. In one novel The Vanishing focused upon all aspects of the Holocaust and the importance of memory, reminding us of the prophetic words of George Santayana, “Those who cannot remember the past are condemned to repeat it.”   The Vanishing touched upon significant truths regarding human nature, the importance of appreciating diversity, celebrating our common humanity, and recognizing the potential of each individual to affect positive change.

A mesmerizing story of female empowerment, bravery, and triumph over adversity during the Holocaust.